On March 4, 2016, Posted by GoAppmin , In Android Apps, With Comments Off on Alto’s Adventure – An App Review 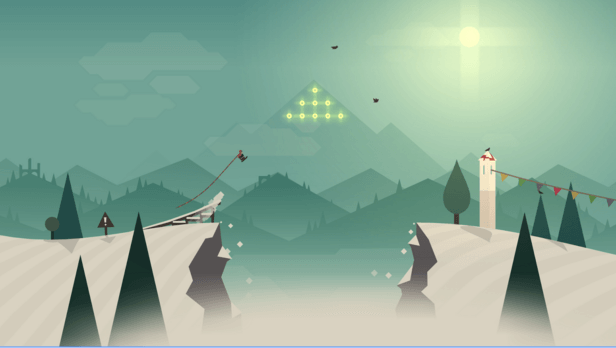 At first glance, one may assume that Alto’s Adventure is just another side-scrolling game, but that would be a gross understatement. The classic, throwback style, side-scrolling theme serves more as an interface to attract players of all skill levels and not just the ones who like the theme. This game is easy to play right from the beginning, testing your ability to stay on the slopes as long as you can hang on!

There are prompts to teach you the game from the moment you tap “start”, which is very helpful as there are a lot of similar games that basically teach you via trial by fire. You will not be assaulted with multiple pop up adds before you ever begin like many of Alto’s Adventure competitors. However, the option to learn about offers and other great games are still present, just not shoved into your face right away. The lack of flashy colors and over complex graphic designs are also an attractive quality to this game. Many games on the market these days go overboard in this area, rendering it pretty hard to see what is happening on such a small screen. Alto’s Adventure is more centered around the function of the game and making it easier to focus on getting a higher score. This is an attribute that is all too absent these days in video game platforms of all kinds.

This app will remind you that a video game can be fun based strictly on the play of the game, alone. Time will slip through the hourglass as you frantically try and retrieve the llamas that escaped from your cozy little ski home in the beginning of the game. Alto’s Adventure may seem repetitive at first, but once you realize it is a score/point based game you will quickly try and focus on optimizing your skills on the slopes.

While offering 10 levels, 2000 different achievements to unlock, llamas that need rounding up and coins to collect, losing track of when you started playing becomes very likely. As an added challenge and pleasant surprise, the sun goes up and down while a lightning storm may pop up, adding to the urgency of gathering up those runaway llamas. Also, the alternating sunlight heightens the difficulty while the lightning storm gives a strobe like effect to the screen, forcing the player to focus that much harder on attaining a new high score. All the while, among all that goes on in the game, being able to bust out dope moves on a snowboard is reminiscent of the classic Tony Hawk Skateboarding games of the early 2000’s.